Jean-Baptiste Launay, better known as Jisbar, is a French pop-street artist, he lives and works between Paris and Amsterdam.

Jisbar is famous worldwide for being the first ever artist to reinterpret classical art masterpiece figures such as Mona Lisa, Frida Kahlo and others from Klimt and Warhol with his personal style of pop and street art. This striking blend of influences shaped a clear and unique identity that inspires a lot of artists and brands across the world today. Each artwork surpasses the idea of a simple remake as it is enriched with words, slogans, numbers and codes that help create a new story to decrypt. It challenges every person who looks at it to find their own clues by focusing on every single detail. The abundant signs generate new angles inside which the spectator finds new elements and interpretations every time they look at the painting.

From San Francisco to the Gold Coast, from Bangkok, Venice or Paris to London, Jisbar’s work is shown in many galleries all over the world, and well-known museums such as the Manarat Al Saadiyat in Abu Dhabi or the National Museum for the History of Immigration in Paris.

In the Parisian museum, Jisbar introduced his piece “Love is a New Fame” to the then President of France François Hollande during an art exhibition condemning racism and antisemitism.

Jisbar is also known for his various collaborations with renowned brands such as BMW, Armani or JM Weston, and he has contributed to create unique experiences on every one of these occasions. Among all of these memorable events, he organized an exhibition with JM Weston on the Champs Élysées. Jisbar put an exciting new spin on the brand’s identity by incorporating his art inside the flagship store and customizing several of their famous shoes to turn them into true art pieces.

He worked closely with the Italian brand and donated his piece “Ducati Mona Lisa” at a charity auction to raise 170.000€ for the Sant’Orsola Polyclinic hospital in Bologna.

His last performance paid tribute to Leonardo da Vinci on the 500th anniversary of his death. Jisbar sent a new version of his reinterpreted Mona Lisa to fly into space. The painting hovered 33.4 km above Earth for over an hour and a half. On this occasion he became the first ever artist to achieve this performance. His technical exploit was widely applauded though international media coverage.

Holy Art - Venezia, Italia (2020)
During this very particular year where the whole world was hit by Covid, the “Holy Art” exhibition was an important event in a country affected so badly by the pandemic. Jisbar paid tribute to the paintings and frescos of the great Italian masters while revamping them into unique street pop art reinterpretations.

First Painting in Space - Paris, France (2020)
The Galerie Montmartre in Paris hosted the “First Painting in Space” exhibition and showcased the painting that had been sent into space a few weeks before, as a tribute to Leonardo da Vinci on the 500th anniversary of his death. This punk Mona Lisa was propelled into the stratosphere 33.4 km above the Earth for over 1 hour and a half. This world premiere was also a technical exploit: sending a piece of art to be exhibited where no painting had been exhibited before. It took seven months to put every element together, from developing a helium balloon and finding the right materials for the painting to creating the custom-made basket it would hang from. Once everything fell in place and the weather conditions were favorable, “Punk Mona” was launched and the whole performance recorded by a camera attached to the basket. This brand-new perspective in showing art was applauded as a success and the artist’s performance became a worldwide sensation in the media.

Fake News - Venice, Italia (2019)
Jisbar’s new solo show in Venice took place during the 58th edition of the Art Biennale. This time the artist took inspiration from the latest burning issue in media: fake news. He was inspired by the events happening at the time but also by the issue of his artworks being frequently copied. For this exhibition Jisbar created almost twenty artworks inside which he integrated his own “fake news”. He also showed revisited versions of his most classic and iconic paintings that he had transformed into colorful plexiglas pieces.

Iconoclaste - Singapore (2019)
“Iconoclaste”, the artist created artworks celebrating modern-day major icons such Mona Lisa, Basquiat and Karl Lagerfeld. Jisbar portrayed the biggest figures in the world of fashion, art or entertainment while incorporating the unique blend of street and pop art of his style. He offered offbeat perspectives by using provocative elements such as a flashy ‘Karl who?’ question painted on the portrait of the famous designer.

Jisbar's Playground -Bangkok, Thailand (2019)
Jisbar inaugurated his first exhibition in Asia in Bangkok. On this occasion, he showed about twenty artworks specially made for the exhibition that was held at the famous SO Sofitel hotel. It was an amazing opportunity for the artist to set the paintings in the stunning decor of a space overlooking the whole Thai capital. He also partnered with BMW to create the first BMW Art Bikes.

The French Connection - Gold Coast, Australia (2019)
Jisbar participated in “The French Connection” exhibition taking place on the opulent Gold Coast in Australia at the 19 Karen gallery in Melbourne. On this occasion, he created exclusive artworks inspired by the sunny region, all revealed on opening day. He put together a series of collectibles portraying his favorite icons and reinterpreted the paintings into plexiglas pieces customized by hand, among which a punk Mona Lisa, Rich Uncle Pennybags from Monopoly and a flowering Campbell’s can of soup.

Art is a party - Venice, Italia (2018)
Venice holds a special place in Jisbar’s heart. Every year the artist holds his solo show in the heart of this historic European art center.

Jisbar & Friends - Paris, France (2018)
After a first exhibition in 2017 inside the JM Weston store located on the prestigious rue Saint Honoré, Jisbar and the luxury French master shoemaker worked together again on another artistic project. This time, the collaboration took place inside the brand’s flagship store on the Champs Élysées.

Musée National de l'Histoire de l'Immigration - Paris, France (2016)
Jisbar was asked to participate in the “Addenda” exhibition which highlighted the fight against racism and antisemitism through art. The exhibition took place inside the National Museum for the History of Immigration in Paris. For this event, Jisbar covered far-right propaganda posters with a fresco portraying love and international unity. On top of a gigantic heart tag filled with the word “love” painted over and over again like a mantra, he reinterpreted the famous depiction of The Creation of Adam by Michelangelo to convey the power of people coming together. The opening was also an opportunity for Jisbar to present his piece to the then French President in power François Hollande who inaugurated the exhibition. 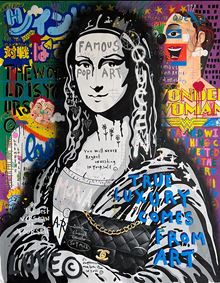