Born in Russia in 1975, Esser studied art from an early age just like any girl from a good family. Encouraged by
her parents, she studied art at the Yekaterinburg College of Art in the Russian Urals, a place known for its
scenic beauty. While attending college, where she earned her first art degree, she met and later married
fellow artist Alex Pauker. After graduating, she and Alex began a new life in Israel where they lived for many
years in an artists’ village in Haifa. Today she lives in Berlin, Germany with her husband and 2 children.
Always in search of new inspiration for their work, they travel the world. On one of these earlier journeys,
Esser discovered the beautiful scenery of Europe and there she enrolled in a student exchange program. She
remained there for several years until she earned her second art degree. During her studies she also gained
experience working as an illustrator and a creative consultant at a publishing house.
Esser says of her work, “The colorfulness of the countryside, the flowers that never stop blooming, and the
sunshine all influence my paintings and the colors I decide to use.” Within her work that she creates only with
a palette knife, one can detect the influence of Cézanne, himself a palette knife artist, particularly from his
later body of work painted in the South of France with its controlled subtle surfaces and increasing use of
primary colors, their division and related tones. Esser’s use of color and color tone is a dominant sensation
and means of expression in her work, where color temperature corresponds to a mood of both the physical
world and the painting.
Working with her palette knife, Esser mixes her colors before she puts them on the canvas. And, depending on
the light she is capturing in an individual painting will use oil or acrylic. Using old techniques, her works are
nevertheless a symphony of contemporary colors. The moment she starts work on a painting she is lost in its
substance. She says, “It doesn’t matter what’s going on around me, I’m so immersed in my work that I don’t
hear anything—I’m in my own world.”
Sharing a studio with her husband, she and Alex Pauker critique each other’s work, bringing objectivity into
play and taking their paintings to a new level of completion and satisfaction. “There is always an improvement
in our work because we always review each other and I see what he should add to his paintings, and he also
tells me.” Indeed, their life together as artists and the camaraderie they share in the creative environment of
their studio extends itself to their home and family and friends. Their studio is the portal to their home and in
Sveta’s words their two children are literally growing up in the studio. “All our life revolves around art.”
NEW ART FORM – PIXELISM
The new contemporary style of painting, Esser calls "Pixel Art." She uses her signature palette knife painting
technique to create an image in a series of equal sized squares and each square in the painting is a different
color. From the naked eye it appears as an abstract image but in a photo or through a camera lens, the image
comes to life in the form of whatever subject she is painting. She is currently focusing on Pop Icon Faces such
as, Elvis, Audrey Hepburn, Marilyn Monroe, Einstein, Charlie Chaplin, and more….
Esser’s work can be found in many private collections in Israel, Europe and the United States, and is exhibited
in numerous galleries throughout the world. 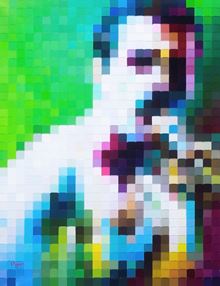 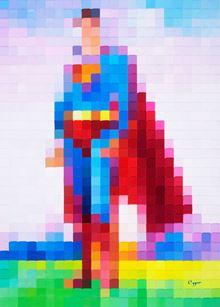 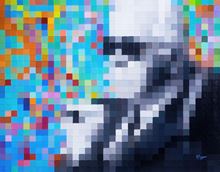 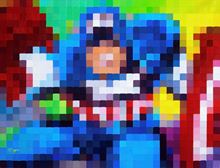