Marcello Silvestre (b. 1977, Naples) is an Italian artist, designer, and architect. He obtained an architecture degree in 2004 and began his artistic career in 2015, reaching a consistent success in both areas. Silvestre has used his interdisciplinary knowledge and experience in order to pursue a holistic approach to his creative process as an artist. Since 2017, he collaborates with high fashion brands, such as Ermenegildo Zegna, in the design of pop-up stores and creative window displays (Zegna-Maserati pop-up store for Dubai Expo 2020; Bally pop-up store in Stockholm, 2021).

His sculptural collections explore themes such as the relationship between man and the soul, the concept of time, the oneiric world of modern urban landscapes, and human spirituality. The artist expresses such complex themes through his particular use of form, figure, and material. Marcello Silvestre’s sculptures begin their journey digitally and turn alive through 3d printing technology.

As an architect, Marcello Silvestre won the competition for the Italian Pavilion at Shanghai Expo 2010, and for the extension of Liceo Farnesina in Rome. As an artist and designer, Silvestre won the “Targa d'Oro” at the Premio Arte 2018 which led him to exhibit his work “The invisible cities” at the Palazzo Reale of Milan. 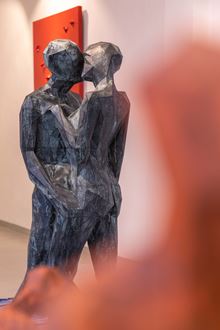