Lee Choun Hwan, who had been mainly working on literary and ink paintings since he took the rostrum in his early 20s, established his unique art world by reinterpreting Korean painting from a modern viewpoint. As seen in his semi-figurative art such as “The Mood of the Mountain,” “The Moon Jar,” and “The Moon Jar (Gold),” his artworks began from finding Korean subjects and eventually reached complete abstractness with his “Light + Grain” series.
His artwork on the creation and destruction of the universe starts from the dot and then moves on to lines and sides, continuing the relationship between artworks. The process of various colors harmonizing on a huge flat surface and forming a simplified pattern in the midst of intricacy is reminiscent of light and wave, and thus enables viewers to discover the form of nature in his artwork. The subtle movements in the artwork are not one-sided to achieve a balance; these are devices that are implicit in the cycles of the nature and the principles of the negative and positive.
The origin of all artworks is the image of the sea that is imprinted on his mind since he was born in Wando, the island of Korea. The landscape of Wando became a motivation for him to depict the nature constantly. Beyond simply portraying the appearance of nature, this made him be rooted in the truth and law of nature, which is related to Eastern philosophy. Lee embodies the logic of deep and mellow mystery, including the condensed trace of the continuity that repeats emptying and filling the mind after the time of endurance. Eventually, the glare of grain that steals everyone’s eyes with the moonlight shows the existence of embrace, meeting sounds from the inner side.

In 1956, Lee Choun Hwan was born in Wando, South Korea. Lee graduated from the graduate school of education at Konkuk University and has participated in thirteen solo exhibitions and around three hundred group exhibitions. Moreover, Lee has been working as an adjunct professor of the Police Comprehensive Academy and visiting professor of army headquarters, endeavoring to do various activities in the art field. 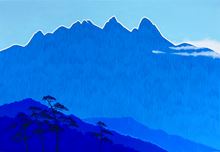