Francesco Tricarico (Born February 1, 1971) is an Italian singer-songwriter.
He rose to fame in 2000, when he released his debut single, "Io sono Francesco", an autobiographical portrait in music that reached # 1
in the Italian sales charts, selling more than 60,000 copies, gaining Platinum status.
The following singles “Drago”, “La Pesca” and “Musica” also obtained great success from critics. Finally, in 2002 Tricarico's self-titled
debut album was released. Invited by Jovanotti to open the concerts of his “Quinto Mondo Tour”, Tricarico debuted on the live scene
with the 12 songs of his first album. He also took part in the Italian famous TV music show “Festivalbar” in 2001 and 2002.
In 2005, after releasing his second album, Frescobaldo nel recinto, he wrote and recorded the song "Solo per te", which was the closing
title song of Leonardo Pieraccioni's film Ti amo in tutte le lingue del mondo. The song received a nomination for the Nastro d’Argento
2006 film award for Best Original Song. The following year he worked with Adriano Celentano as author of the song “La situazione non
è buona”, which is part of Celentano’s album Dormi amore, la situazione non è buona. In 2008, Tricarico participated to the Sanremo
Music Festival with the song "Vita tranquilla", and won the Critic’s "Mia Martini" Award. The song was included in his third studio
album, Giglio. He was part of the Sanremo Music Festival again in 2009, and in 2011, singing respetively “il bosco delle fragole” and
"Tre colori". The songs were included in the albums Il bosco delle fragole (2009) and L'imbarazzo (2011).
In 2013, Tricarico released his sixth studio album, Invulnerabile. The tour started after the album release with lots of dates in Italy.
In late 2015 Tricarico stopped the tour and focused on his art works. The link between his music and his art paintings is very strong and
is part of his search to find his place in the world and a way to communicate with others. In March 2016 Francesco made an exhibition
in Milan entitled "Da chi non te lo aspetti" with his latest paintings, both on canvas and on paper. His poetic universe was interpreted
by the words of the curator Alberto Mattia Martini and the exhibition was organized in collaboration with Fabbrica Eos Contemporary
Art. In 2016 the artist released his latest album titled Da chi non te lo aspetti, that includes the new single featuring the Italian singer
Arisa “Una cantante di musica leggera”. For the album cover, Francesco chose one of his latest paintings.
Tricarico is an unconventional singer-songwriter. His music is difficult to list in a one specific kind of music. There is a strong
autobiographical imprint that always makes it very sensitive and original. Tricarico is able to touch with rare sensitivity the deepest
strings of the soul with simple words, expressing the various feelings with great sensivity. 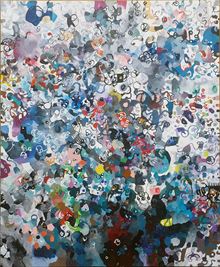 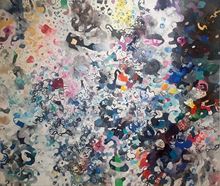 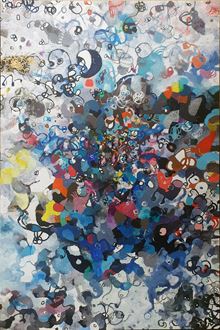