Katharine Morling is an award-winning artist working in the medium of ceramics. She set up her studio in 2003 and has since gained international acclaim for her work. Her ceramic sculptures have been shown internationally at Bergdorf Goodman in New York, Liberty's London, Miami, Italy, Kuwait, Algiers, Germany and France. She has also had solo exhibitions in Sweden, The Netherlands and throughout the UK.

After graduating from the Royal College of Art in 2009, she was awarded first prize at the 2010 World Crafts Council Triennial in Belgium. Morling also represented the UK at the 2010 European Ceramic Context in Denmark. For COLLECT 2011, she showed a new installation "Out of the House" in the Project Space of the Saatchi Gallery. Other notable projects include creating a large wall mounted installation for the new children's ward commissioned by the Royal London Hospital through Vital Arts, and a contemporary dance piece at the Royal Opera House inspired by her work.

As part of the 2012 Cultural Olympiad, Morling was invited to create an artist's response to the Staffordshire Hoard. Morling designed 10 large ceramic sculptures of mythological godlike creatures, that represent the deities that the Anglo Saxons might have worshiped. "Morling and the Hoard" is now on permanent display alongside the Staffordshire Hoard at the Potteries Museum & Art Gallery in Stoke-on-Trent. In 2015 she completed "Gardens Edge" her third large scale installation which included five life size figures and a woodland scene.

Katharine Morling lives and works in the United Kingdom.

"My work can be described as 3-dimensional drawings. Each piece on the surface, an inanimate object, has been given layers of emotion and embedded with stories, which are open for interpretation.

The works I create are pieces of narrative in my progressing story, one piece leads to the next and I work very instinctually. My work represents my inner searching, shown outwardly in domestic and uncanny scenes.

I have to trust and believe that I can communicate through this medium. The works that I make are pieces of narrative which are a progressing story leading on from my last works, the journey continues." 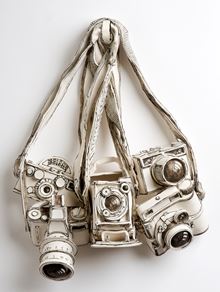 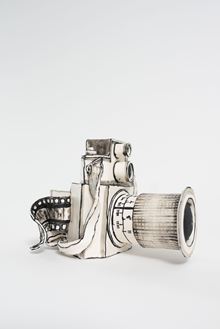