1966
Born in Birkesdorf, Düren, Germany
1992
Apprentinceship certification exam as stone sculptor, since then work as a freelancer
1993 - 2004
Studied history of art / philosophy, promotion
2007 - 2009
Artistic employee of the Insitut für Kunstwissenschaft at the university in Koblenz, Germany
since 2012
Lives and works in Aachen, Germany, and Leipzig, Germany

After an education as a stonemason Oliver Czarnetta (b.1966 in Dueren/Germany) studied history of art and philosophy. The work of about a hundred sculptures, created in the seven years from 2001-2008, consists mainly of human heads shown from the outside. Ultimatly the perspective was not enough for Czarnetta, so since 2006 starting with his series SPEKTRUM he has been trying to look inside the heads as if they were inhabited houses. 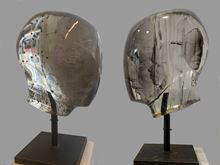