Rob Will is a multi-disciplinary artist living in the confines of Texas Death Row for a crime he did not commit. Wrongfully convicted in 2001, he has lived on Death Row in a 60 square foot cell in complete solitude for the last 18 years. He prospers most in the treacherous environment through his creativity although he is essentially locked in a cage in one of the most notorious prisons in America, the Allan B. Polunsky Unit in Livingston, Texas.

Over his almost two decades on Death Row, Rob has studied and taught himself everything he knows about creating art. With inspiration from artists, philosophers, and writers such as Vincent Van Gogh, Andy Warhol, Carl Jung, Albert Camus, Aldous Huxley, Friedrich Nietzsche, Leo Tolstoy, Thomas Bernhard, and various books surrounding color theory, sketching, and more, Rob has learned to create art in the deepest confines anyone could ever imagine in their most terrible nightmares. 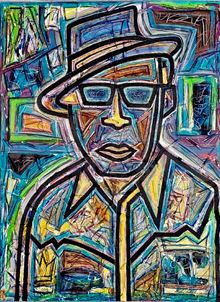