Liza Grobler is a South African artist who works with a variety of media, often exploring ideas that bring together physical and psychological spaces, and historical and ecological ‘scapes’. Her practice is built around process, putting the materiality and ephemerality of the objects and media she works with in tension.

In 2016, she was a recipient of the Africa Centre Award, and the Iziko Museums commissioned her to create a site-specific work for the South African National Gallery. Other career highlights include: a solo project for the Investec Cape Town Art Fair (2017), the AKAA Art Fair in Paris (2016), a public artwork for Cape Town International Capital of Design (2015) and the screening of her video works at the ADDIS International Video Arts Festival (Ethiopia) and at MOFO for Forever Now (Tasmania and Deep Space, 2015).
Grobler has attended residencies in Norway, Finland, Switzerland, Belgium, France, Mexico, India, the United States (ARTOMI and Residency Unlimited), and initiated an international residency and exhibition ‘Smokey Signals from the Groot Karoo’ in South Africa (2017).

She was nominated for the Helgaard Steyn National Award for Contemporary Painting (2015) as well as short-listed for the Commonwealth Arts and Craft Award (2006). Exhibitions include numerous solo exhibitions nationally as well international group and site-specific projects. October 2019 sees her latest solo, 'a rainbow in my pocket’, which will be exhibited at Everard Read Cape Town. Her video work 'Voices from Deelfontein' debuts in Belgrade in November 2019.

She is represented by Everard Read/CIRCA Galleries. 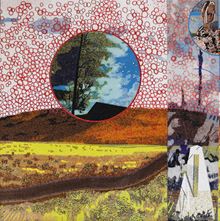