South African artist Nigel Mullins’ vivid and compelling works present a compendium of fruitless visual tropes that have perpetrated, sustained and perpetuated Western culture since the 18th century. His painterly exploration makes use of sumptuous impasto, veering between figuration and abstraction without restraint. Mullins applies his paint as a libation covering a sacred artefact or an amulet – fetishistically. The paint, dense in meaning and referential value, thickly covers the support as it alters and constructs. This explicitly references the painting as a thing; a support to which meaning (as material) is applied often in viscous layers and over an expanse of time.

Mullins was awarded the first prize at the 14th Annual Royal Over Seas League Open Exhibition in London in 1997. He was a nominee for the Daimler Chrysler Award for Contemporary South African Art in 2000 and recipient of a merit prize at the ABSA l’Atelier in the same year. His work is included in such public and corporate collections as: Rhodes University, ABSA, Nelson Mandela Metropolitan Art Museum, South African Association, SASOL, TELKOM, Rand Merchant Bank, Hollard, Westminster and Chelsea Hospital Collection, Pretoria Art Museum, Sanlam, Nando’s UK, Spier and KPMG. 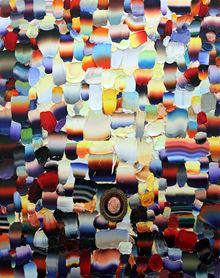 Effigy from a Mass Gathering

Still Time, an Effigy from a Protest