Lady Skollie (born Laura Windvogel) is a feminist artist and activist based in Johannesburg, South Africa. She graduated with a degree in History of Art and Dutch Literature from the University of Cape Town in 2009. Filled with bold colour, god-like figures and suggestive fruits, Lady Skollie’s ink, watercolour and crayon paintings revolve around themes of gender, sex and the politics of lust, consumption, as well as her musings on identity.

The artist’s work has been exhibited widely across South Africa, and at a number of international solo and group exhibitions and fairs. In 2017 she artist contributed artwork for a gala performance of 'The Children’s Monologues', a benefit held by the charitable organisation Dramatic Need, directed by Danny Boyle and held at Carnegie Hall in New York, USA. She has been featured on BBC Africa and CNN International on 'African Voices', as well as on the BBC World Service’s online and radio series 'In the Studio'. She was also included in the 2018 edition of OkayAfrica’s '100 Women', an annual list which honours women across 10 different fields for their achievements and influence.

In 2019, Windvogel was commissioned to design the new R5 coin to commemorate 25 years of constitutional democracy in South Africa. 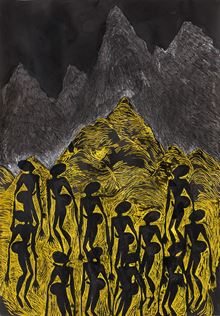 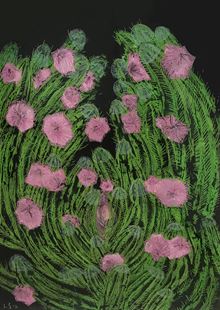