Christophe Mourthé is one of the world’s leading fetish photographers.
His unique vision has found expression in art books of his own conception, exhibitions, installations and films.
He has also worked as a commercial photographer, shooting editorial features, print advertising, record albums and book
covers in Paris, London, Los Angeles, Las Vegas and Munich.
Christophe Mourthé is a visionary who quickly felt that social trends in the 1980s were constantly changing. He rapidly became a forerunner of the ‘fetishist’ school, which was later incorporated by the world of advertising. Christophe Mourthé’s fetishism became a true style, preceding a fashion trend which haute couture would later appropriate. His photos are rooted both in the tumultuous period of freedom of the 1970s and the period of ‘safe sex’, which would abruptly halt the enthusiasm of that decade. Other ways of experiencing love developed, and one of those was fetishism. Christophe Mourthé belonged to the ‘Palace’ generation, just like Mugler, Gaultier, Chantal Thomass, Madonna, Nina Hagen, Blondie, Lou Boutin, etc, headed by the spiritual father Fabrice Emaer.

Emily Marilyn and her flamingo 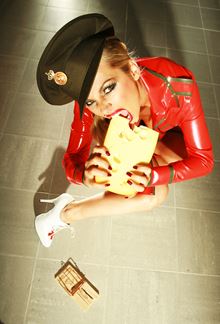