Charles Fazzino, creator of 3D Pop Art at the end of the seventies, was born in New York in 1955 where he still
lives and works.
For over 30 years, Charles Fazzino has enchanted us with his three-dimensional representations of colourful,
playful and glittering worlds. The New York artist and creator of the 3D Pop Art movement, initially focused on
his city, painting with extreme detail and in a very recognizable style with his districts, inhabitants, taxis and frantic
life… In the following years, he turned to other American, European or Japanese cities. Sports, cinema and
medicine are among his favourite themes. His artistic process includes several sketches to begin, then he creates
an original painting from where silk screen prints will be made, hand-cut and glued in layers.
Charles Fazzino is often referred to as a pop culture historian because of the breadth of his work and the way it
touches his collectors and captures the best parts of their contemporary lives. His legacy will mark him as part
of the next generation of famous pop art artists as he follows the paths originally forged by pop art pioneers like
Andy Warhol, Keith Haring, Red Grooms, and Robert Rauschenberg.
He has been presented in Paris for fifteen years. 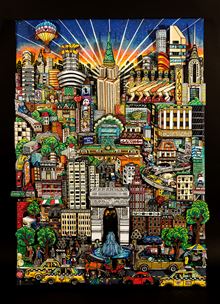 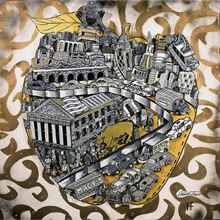