Blessing Ngobeni was born in rural Limpopo, South Africa. At ten, he moved to Johannesburg where, after a tumultuous decade, he entered the contemporary art scene. Ngobeni has made the corruption, incompetence and duplicity of current South African ruling elite the subjects of his art. He tackles the disconcerting consequences of betraying democratic ideals, and the expanding gap between the rich and poor.
Ngobeni’s hybrid visual languages point to the grammar of Surrealism, the rebellion of Dada, the symbolic force of Neo-Expressionism and the economic use of visual elements of Minimalism. These qualities effectively articulate Ngobeni’s fusion of nightmarish, absurd, beautiful and captivating imageries.
Ngobeni has been awarded numerous residencies in South Africa and abroad, including being the only artist from Africa selected for the Cleveland Foundation’s Creative Fusion Program in 2016. It is of importance to note that Ngobeni is an artist also involved in mentoring young artists. In collaboration with the Bag Factory, the ‘Blessing Ngobeni Studio Art Award’ (established in 2017) supports a young artist on an annual basis via a residency, funding and exhibition opportunity. Dance on Ancestral Ash I 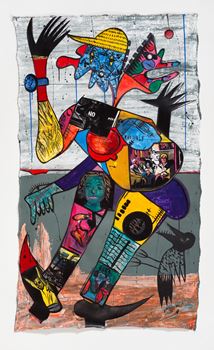 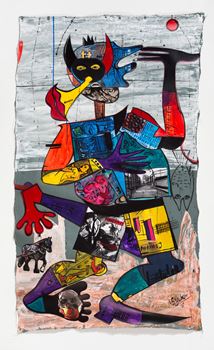