It is in October 2010 that Virginie Barrou Planquart created in Paris the gallery that bears her name. Dedicated to contemporary creation, the gallery promotes and supports emerging or recognized artists with a strong and unique identity. They create universalist works with visual emotion and memory affect. In favor of an atypical and demanding programming, the gallery brings together French and foreign artists who, each in their own language, approach the viewer with freshness and immediacy.
Virginie Barrou Planquart participates in many international fairs, regularly presenting her artists in Paris, New York, Miami, London, Brussels, Basel or Hong Kong. Willing to support public's eye and initiate dialogues between artists, the gallery keeps deepening its reflections to better understand the growing influence of pop culture on the development of contemporary art, its scope, his exegesis and his various modes of transposition. Between tradition and modernity, the gallery is exposed through different spaces, whether physical or digital, currently available to us, 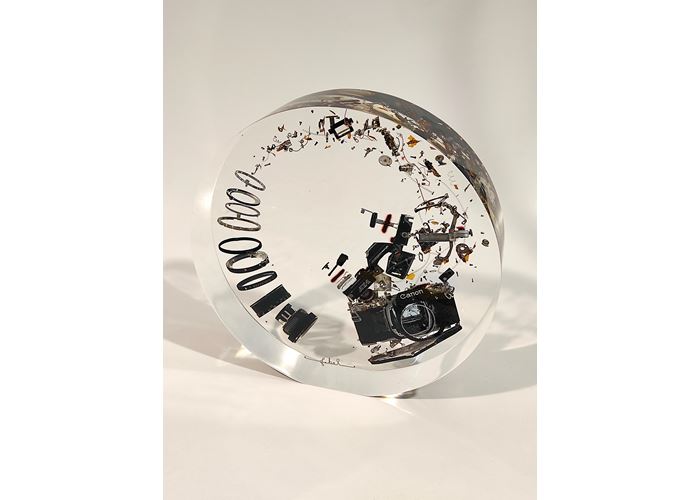 Equally relaxed painting as he is sculpting and setting up installations, François Bel expresses himself using inlays in glass, aerial suspensions and modelled wire in his complex pieces, which claim to be just as eclectic as his inspiration. But whether he is working with numerous mediums or just one, his approach is always the same: using the distraction of familiar objects to question modern society, its individualism and habits of consumption. Using an offshoot system, inherited from Street Art, Pop Art and New Realism, the artist rethinks the reality of materiality. By locking day-to-day objects behind bars, hanging them in the air, or trapping them in blocks of synthesized glass, the artist exposes a stationary state which is both sublime and critical. Frozen in a rupture, explosion or levitation, they solidify with grace in a sort of aestheticized recycling and gain a completely new meaning. The juxtaposition of the criticism of consumerism and the poetry of recycled materiality, within his leaping, magical objects and little, incrusted ‘big bangs’, allows them to represent our dreams and repressed indignation. By mixing anger, frustration, fascination and sacredness, the artist is finally able to uniquely convert the worries of our society into physical representations. These artworks defy the laws of gravity and the logic of time to confront our own fragility with their changelessness. In an increasingly fast-paced society, where all is destined for obsolescence, Francois Bel puts forward the idea of reaching into this “other” space of unresolved objects and “moments” to try and stop time, the time that passes, consumes us and undeniably survives us!

A designer and graphic artist, both by training and trade, Stéphane Gautier designs interiors that have a strong personality; original concepts that are born of his ideas and intuitions; he is like an orchestral conductor, coordinating the various trades until completion. From this practice, which has earned him recognition in the design world, he draws on a unique talent for deciphering symbols and images in his art, and for transforming them into a universal alphabet that everyone can perceive, in a direct and immediate link to the work.
Stéphane created his first picture at the age of 13, deciding to stick and paint his toys on a canvas. This first provocative gesture and artistic genesis, which, rediscovered years later, arouses emotion and recognition in all those who see the emotional objects that marked their past.
After this founding impulse, Stéphane would never abandon his interest in childhood, the moment in which he believes one’s primary needs are expressed universally.
There is no point in searching further for the reason behind the attachment that everyone brings to these works: they touch instinctively.
And yet, if Stéphane’s rooms arouse immediate empathy by their symbolic nature and the way in which they appeal to memory, this attraction also brings with it a more ambitious programme.
Make no mistake, if this visual artist charms us, it is to make us think more profoundly and feel the power of the image: a misappropriation of contexts such as “Happy Bears” forming flags, a manipulation of childhood through medicines in the shape of sweets, a troubling gap between form and substance when a group of small plastic soldiers comes together in a heart shape on the canvas.…
His creations are undoubtedly jubilant and display his expertise as much as his enthusiasm, moving from one medium to another, using all the possibilities of ready-made art to turn them into pictures, sculptures, surrealist or valuable objects… Everything, or almost everything, is shown here.
Understanding only comes as a second phase, however: the art of Stéphane Gautier is permanently shifting. By moving an object from one context to another, re-injecting the stereotypical symbols of childhood into an adult setting, he turns away from all traditional codes of art (pictures, paintings, sculptures, drawings) only to reappropriate them. And it is by way of this ironic distance that this intuitive creator invites us to a deeper consideration of the means of representation, of the effectiveness of advertising and propaganda, and finally of the sacralisation and misappropriation of childhood nostalgia.