The gallery hosts art exhibitions for gallery artists and collaborates with galleries outside Hong Kong. Galerie Koo offers art consultancy service, from development of commissioning work for projects, supervising the on-going process, to the final monitoring of the installation of work.

The gallery targets to make available different themes of original paintings: abstract, conceptual, landscape, portrait, fantasy world… where individual artist conveys his/her theme of perceptions into distinctive ideas with an aesthetic approach, to more amateurs and collectors through art exhibitions at the gallery and art fairs round the world. The gallery aims to promote contemporary arts & Chinese contemporary ink paintings with beauty and colours to art lovers of all levels domestically and internationally. 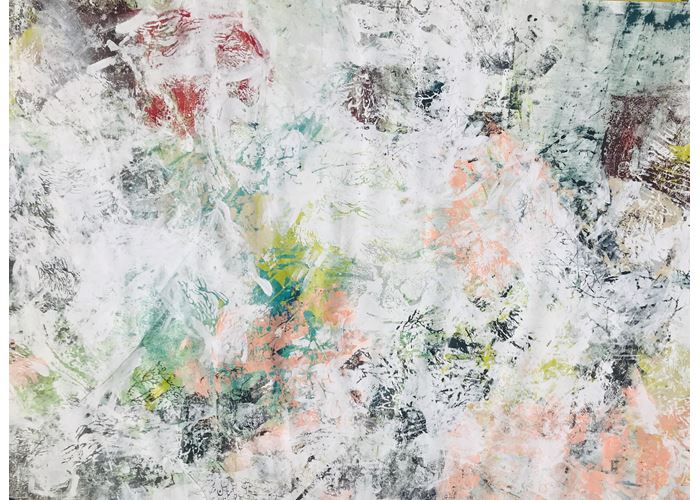 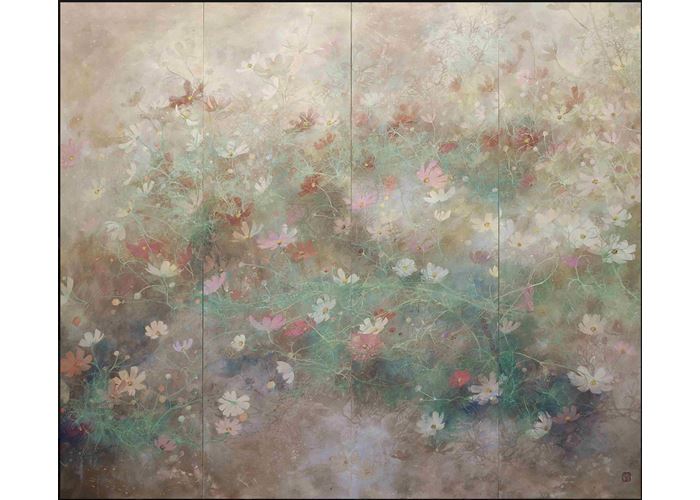 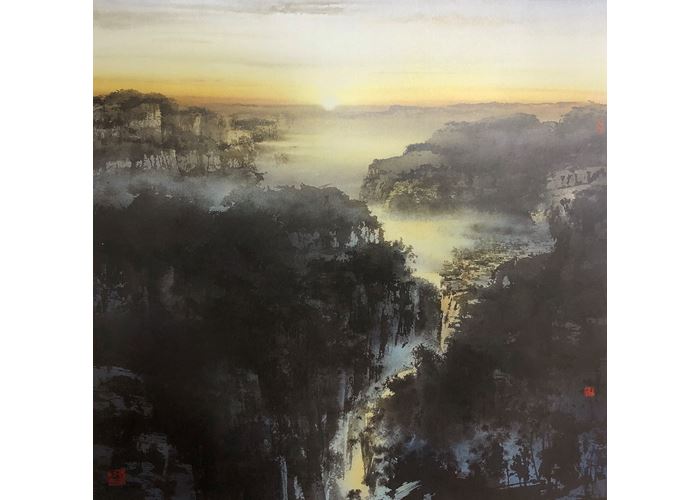 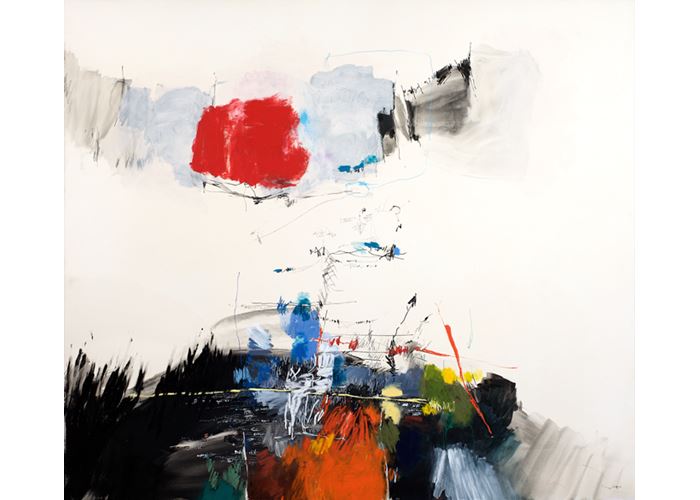 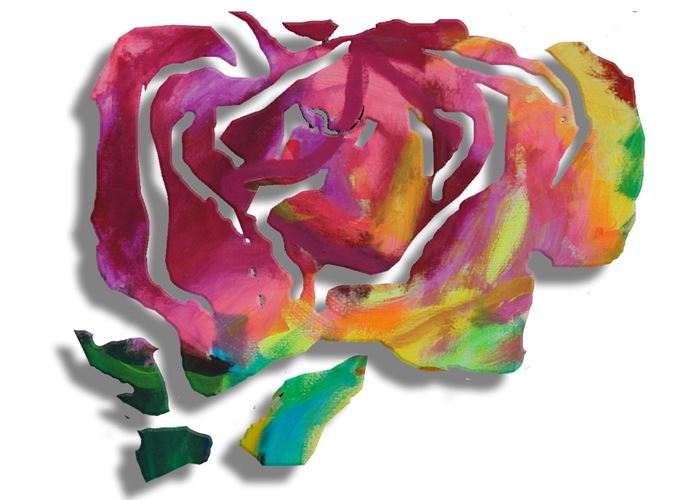 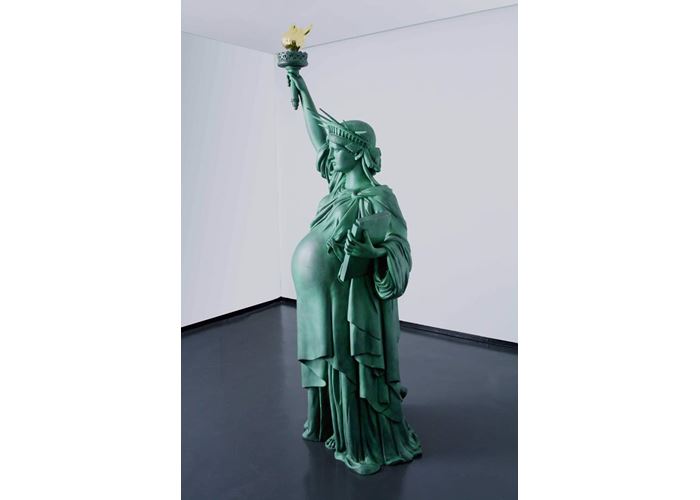 Yu Xiao Who cares whose seed it is! The pregnancy is mine.

Amélie Ducommun is a French-Swiss artist, born in 1983, and was graduated at Les Arts Décoratifs Paris (ENSAD) and the School of Fine Arts in Barcelona.

Amélie paints about nature for almost always—where nature has captivated and inspired her paintings. The origin of her work lies mainly in a questioning of memory, perception of landscape and the inter-relationship of natural elements.

Each light of a country, a place offering it a special harmony. She must search for that light at each location—to discover and apprehend. It is in this sense that she loves to travel, to find her first impression on things. To do this she needs to regularly undock her daily, to always have a fresh look. She finds the first sensation, the feeling that the landscape she met expressed a truth. She has this need in her works to arrive at a neutral place or virgin, where everything needs to be felt for the first time. Therefore, moving from place to place, she always seeks the feeling of renewal. The trip allows her to create, when unlike the daily shut her up in comfort and technical familiarity. Her works over the last ten years has focused on water and aquatic landscapes and began in France in front of the grand spectacle of marine landscapes of the Atlantic coast, later in the more intimate, rivers and mountain in France and Spain. The memory of water is left by the more or less ephemeral footprints in other elements. Earth, rock, wind, are the memories of these flows.

On the island of Ouessant (Bretagne), where she lived for a year, she began a work entitled “Estran”. She has made a hundred pieces that speak of the part of the beach, constantly covered and uncovered by the marée. This is a constantly changing space, in perpetual motion. The movement has become synonymous with life for her and she decided to concentrate her researches there, for many years.
During her stay of two years in residence at the "Casa de Velázquez" she shifted permanently cutting through the landscapes of Spain to produce two series, namely the “Paysages en mouvements” and “Paysages Furtivos”. She has worked in Extramadura, in the Mancha and in the surrounding landscape of Madrid (Pedriza), always around rivers or lakes. Following this residency, she was invited by Miro Foundation in Mallorca to realize several works in interaction with the landscape of Majorca. These works are the fruit of research on rivers and streams, they speak about the footprints of two elements: water and stone. Since she carries out series between the Aude and the Gironde in France and works mainly on the musicality of painting. She explores the colorful sounds with muted tones caused by the rustle of air over water. Amélie decided to penetrate the surface of the water, dive, imagine the bottom of these aquatic movements and noises.

CHEN Yiching (b. 1975) was born in Taiwan. Chen graduated with a master degree at faculty of Fine Art, Kyoto City University of Arts in 2004. She was a student of YAMAZAKI Takao, the distinguished master of the Nitten movement, since 2000. In 2003, she won the prestigious Grand Prize of the Shouhaku Museum with her painting entitled « Kabocha » (Pumpkin). Her talent and potential were recognized by Atsushi Uemura, one of Japan’s great masters of Nihon-ga; she was awarded a studio and the opportunity to study under his guidance following her master degree. In 2004, Chen had her first solo show at the Nasic Square Gallery in Kyoto.

With great admiration of the work of the Impressionists in the late 19th century, CHEN moved to France; where she continues to develop her own artistic research and pedagogy in Paris with a well set Nihon-ga atelier. Chen is one of the rare contemporary Nihon-ga artists in Europe, who has lived in Japan and studied under renowned Japanese masters. Chen is best known for her large scale polyptychs. These multi-paneled screens depict contemporary landscapes garnished with explosions of blossoming flowers. Her other large works also derive inspiration from nature using traditional Japanese painting techniques and materials.

Chen is the author of the first book in French on the practical technique and history of Nihon-ga “Découvrir la Peinture Nihon-ga , Art Traditional Japonais”, published in September 2012 by Editions Eyrolles. Chen is the Professor of Nihon-ga at The Guimet National Museum of Asian Arts, Paris, France, and a member of the Foundation Taylor for Arts, France. Artist currently lives and works in Paris.

He Baili (b.1945) is one of the foremost Hong Kong Chinese ink artists working in the medium of ink and brush. He, widely recognized as a pioneer in the field, is known for his constant innovative practice while paying full respect to tradition. His “He Style of Landscape Painting” harmonizes the spirit of East & West and the essence of modern & contemporary art. He Baili is with Christie’s ever since his first Chinese ink painting auctioned at Christie’s New York in 1987. He’s popularity in the international art market has been growing steadily in the past 32 years.
For HE, change lies at the heart of his artistic practice. Throughout a prolific career spanning five decades, he has continued to experiment with diverse styles and subject-matters: from early idyllic sketches of fishing boats off the shores of Hong Kong Island to the majestic portrayal of ridges and mountains of North America. In recent years, HE has travelled extensively in China, painting magnificent scenes of sunrise with a new vitality of prowess, adding a splendid of richness and elevations to his painting.
Inspired by the magnificent spectacle of morning light casting over mountains through the mist, He Baili masterfully captures the sublimity of nature in awe-inspiring scenes of sunrise. With broad and lyrical brushstrokes, the artist has been allured to painting landscapes featuring rays of morning light in recent years. The inspiration came from a trip he made to the Taihang Mountains in northern China, where the breath-taking heights of mountains sharply contrast with the idyllic landscape of the south. He’s rendering of precipitous rocks, looming clouds and distant mountains present a feast for the eyes; for the artist, sunrise symbolises renewal and hope.
Publications include Works of Art by He Baili, Miniatures and Fan Paintings by HE Baili, Baili’s Vision, HE Baili’s Idyllic Hong Kong in Ink and Meandering Through Art in Leisure. HE currently serves as a founding member of the HK Association of Artists.

Jean-Philippe Duboscq (b.1960) is a Belgian painter, graduated from ENSAAV, LaCambre, in Brussels. Duboscq has always painted, drawn and composed. He started with materialogy, using hessian, unground pigments, pumice stone and sand. At the end of the 1990s, he made a radical change, using structures made of stains, blotches, crossings-out and graphs appeared which he saw as a confrontation between different powers. The architecture of his canvasses and drawings appeared to be torn, suspended, mobile.

Duboscq creativity directs to the fluid and diaphanous backgrounds made from paint runs and absorption occurs, and blends in together with his brisk and bold writings on canvasses. His intuitive movements lead him to resistances, to deviations. A kind of distortion of the form of which the subject is painting. He creates a world in bebop tempo, scratched, crossed out, erased, with saturated colours, syncopated rhythms,
of which the space in perspective opens to an internal light.

The idea of freedom is always the key word for him. Duboscq wanted to free himself from control and from composition, to leave room for the unexpected… It is his experiences accrued in which we perceive the musician’s tribulations, an artist’s aspirations, and a painter’s doubt. To him, painting seems to be a matter of gut feeling, an emotional issue… Artist lives and works in Brussels.

MUHER is the pseudonym used by a Spanish couple from Madrid, Francisca Muñoz and Manuel Herrera. These two versatile artists work in fields as wide as paintings, sculpting (including large scale sculpture), interior design and architecture. The recurring theme of nature in their artworks is motivated from their frequent travels around the world… tailoring their works to be vivid, expressive and full of energy.

MUHER’s ingenuity in managing the light and kinetic movements of the space had made them to create their own style of artistry quality in both painting and sculpting, had made their artworks visually stunning. MUHER´s vivid palm trees and sumptuous flowers invite us to enter into their personal fundamental creative world.

Muñoz and Herrera live and work between Spain and Florida. They have create together since the beginnings of the 80s and have shown their works all around the world—Latin America , Europe , the United States, Africa and Asia, through important international museums and exhibitions. They have contributed with art in public spaces in their home country, and in Miami.